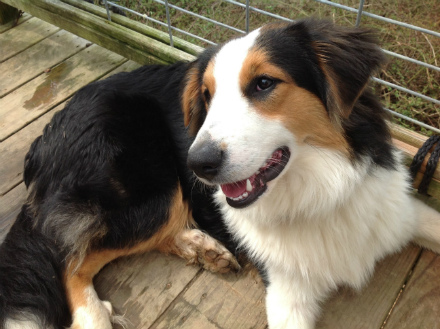 Erika Harrison wrote the following on Gilly’s OTSC registration: Gilly is an integral part of our small homesteading operation and the nature-based homeschool enrichment program on our property. He is responsible for keeping our chickens in their pastured enclosure, and will herd them back toward their fence if they are out. If they do not fly back in on their own, he will collect and 'hold' any wayward chickens with a gentle paw until a human comes to place them back where they belong or gives the command to leave it. He accompanies the children on their adventures throughout the land, and is quick to tell on them when they engage in something he has perceived or learned is not appropriate (he barks when our 4 year old heads toward our house construction zone without shoes!). He guards the yard and garden from intruders, and alerts us when something is out of the ordinary. Our neighbor's bull crashed through our pasture fence and Gilly was a great help, both in alerting us and helping keep him contained and herded back. He is calm, gentle, and extremely biddable and intuitive. An incredible working and family dog.

Gilly is here locally at a forest school with her human caretaker, Erika. Gilly started out in their home and Erika seemed happy that the transition away from litter mates and mama was met with no crying and all pees and poo outside. The first few days there was some annoyed, growly, snapping at kids when he didn't want to be held or pet, but this behavior went away after a few days. Perhaps it was relocation stress or just how he communicated initially. He did have some worms those first days and was not feeling well.

In the first week when Erika was late feeding him his lunch he brought her his bowl, set it down in front of her and barked, she declared him a puppy genius. In late Sept she told me he "has learned to herd the chickens out of the garden and back to their fence. He also won't let their youngest child (3?) into their house construction site without an adult. He's the smartest dog ever." In early Dec. 2018 Erika wrote "Gilly now pins chickens gently with his paws and waits for us to get them on our command of 'hold'". Early Jan. 2019 she wrote, "Just want to touch base to let you know how incredible Gilly is and how thankful we are to have him. He is so smart and intuitive and sweet, alert and protective while getting along with everyone on our cue that they are a friend. We love him so much!" 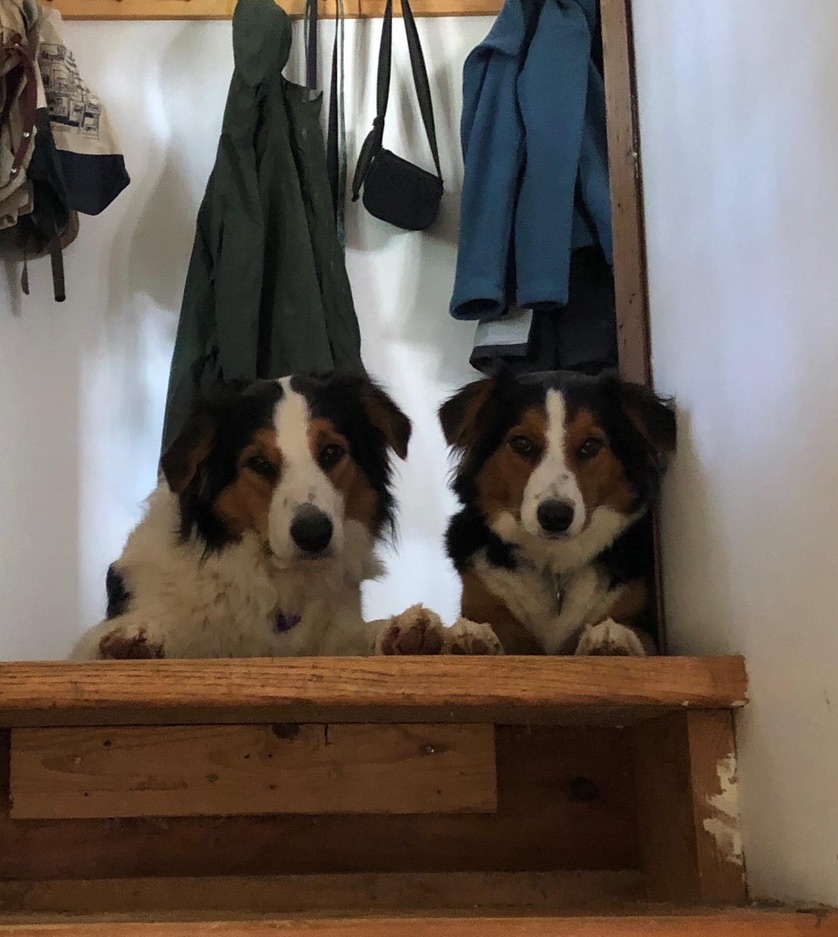 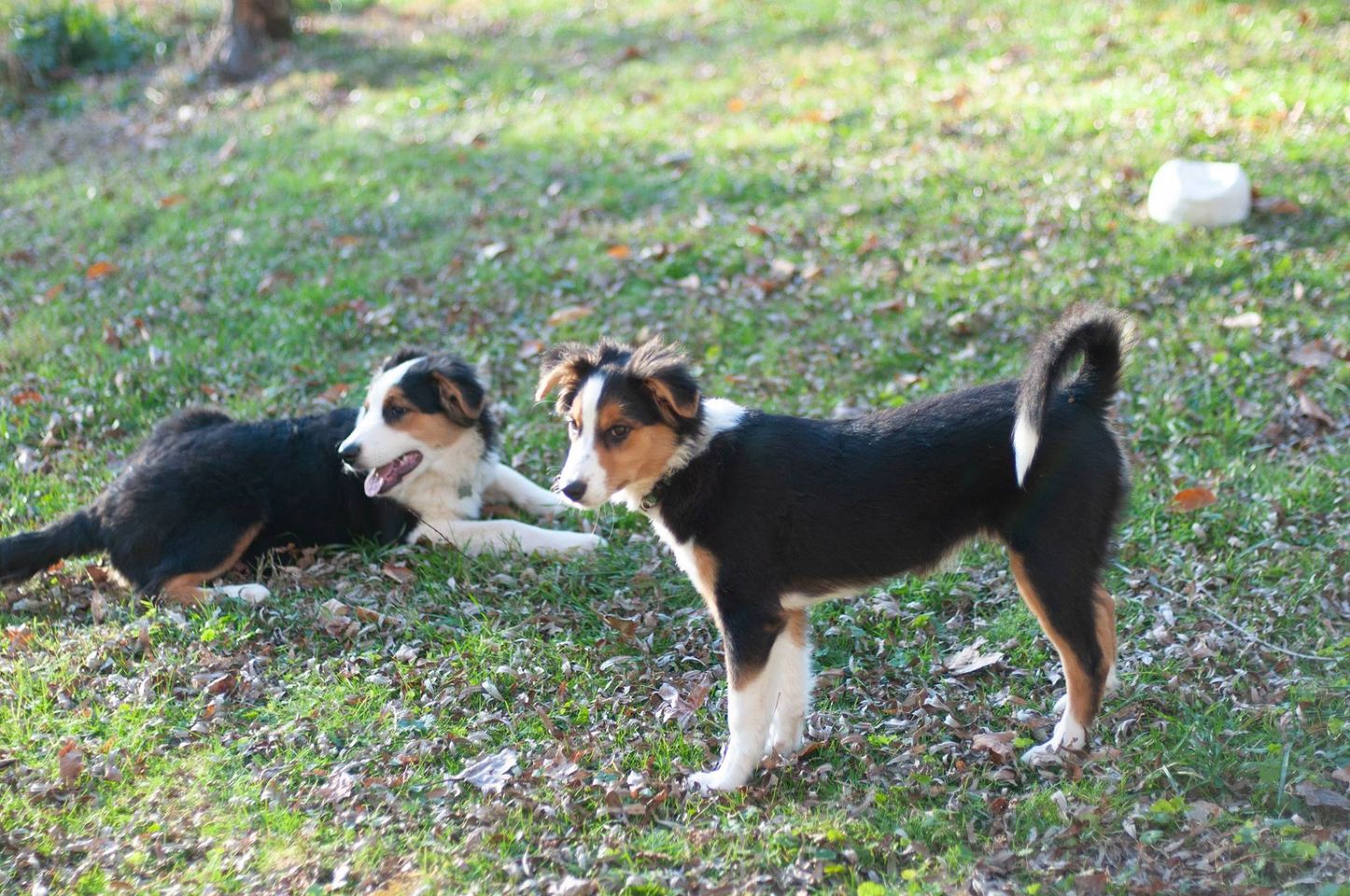 Gilly and Maple have owners who are close friends and they get to see one another often. 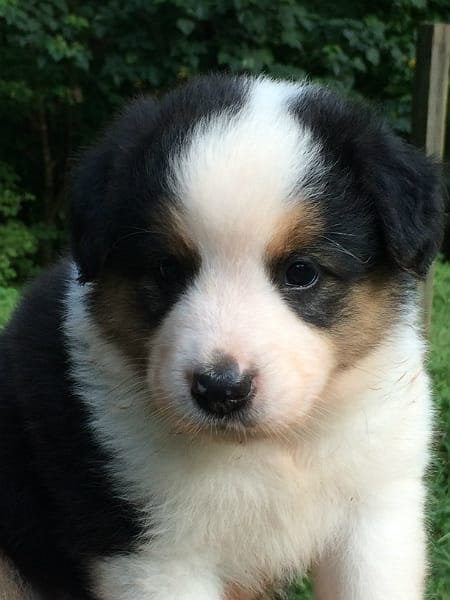 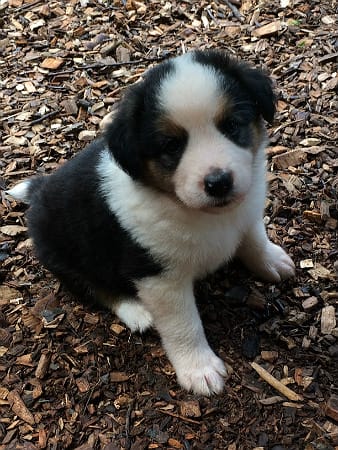 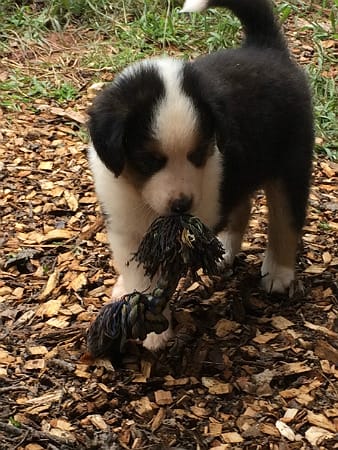 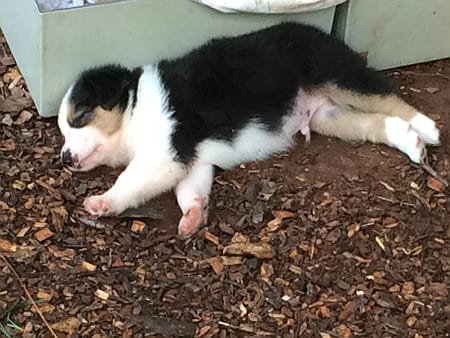 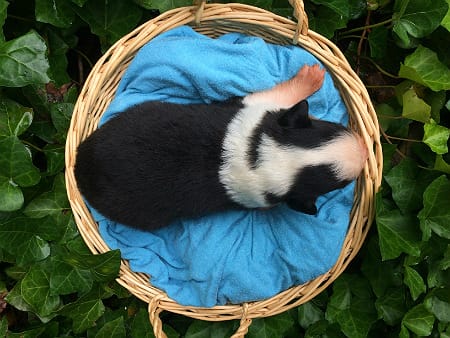 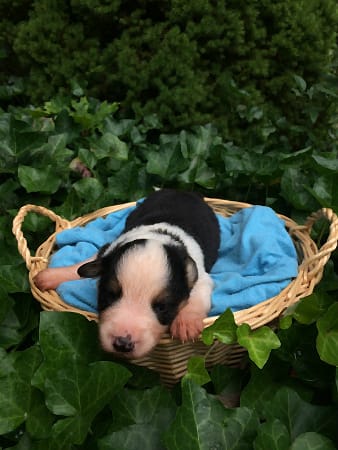